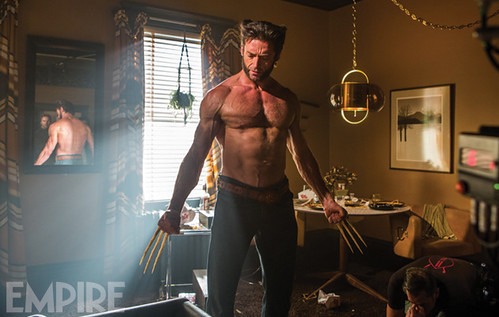 (By the way, Eschatology is the study of the last days.)

Spoiler Alert! Read no further if you were planning to watch Days of Future Past and haven’t gotten around to it yet!

In the most recent X-men movie, Days of Future Past, things are not going well for our mutant heroes.  The movie begins some 15 years in the future where the X-men are being hunted down and eliminated by mutant killing robots.  In order to survive, and save the rest of humanity from the unintended consequences of a campaign to control the mutant population,  they hatch a plan to send the consciousness of Logan, AKA Wolverine (pictured above), back in time to warn his friends of the hopeless future that awaits them and give them a way of preventing this future from ever happening.  So, in short, Logan is incarnated in a 1970s body to bring the bad news of the fate that awaits his friends, and then gives them advice in how they might prevent it from happening.  Hmmm, that got me to thinking

Metaphors are always limited – if you push them too far in any direction they will eventually break down.  Never-the-less, this story, through contrast, may shed some light on a healthy way to see the resurrection of Jesus.

Just like Wolverine comes from the future to occupy a body here in our present, Jesus comes out of the grave as the firstborn from the dead.  He is the first one from God’s future to arrive in the present; He is the first fruit of the resurrection (Col 1:18) but it is a mistake to think of Jesus’ resurrection as an interruption in progression of history. This isn’t just Jesus returning to life after a two day power nap. Jesus isn’t just an exception to the rule: “You die, you get buried, you disappear.”

In the resurrection of Jesus, God is “doing a whole new thing!” (Is 43:19).  Paul says the same thing in 2 Cor 5:17, “Therefore, if anyone is in Christ, the new creation has come: The old has gone, the new is here!” Your baptism is a preview of an arrival that will occur in the future.  Just like your body comes out of the water, your new resurrection body will come out of the grave (For more on this idea see Rom 6: 3-5).  The Apostle John closes the book of Revelation with a quote from Jesus, “Look, I am making all things new!” (Rev 21:5). That is what is happening in the resurrection.  It is the first part of God’s new creation showing up in the present.

The death of Jesus is not just a transaction to appease an angry God.  God is doing some new creating here! First Jesus, and then the rest of us.  If you read about the resurrection appearances of Jesus in Matt 28, Luke 24,and John 21,  something curious is going on: they don’t seem to recognize Jesus, at least not at first.  Jesus’ body is somehow both the same (holes in Jesus hands and his side), but it is also different at the same time.

In some ways, however, what is happening in Days of Future Past is the opposite of what is happening when Jesus rises from dead.  Logan comes to the present with bad news about a hopeless future.  Jesus comes to the present with good news (Gospel) of a hopeful future!  Logan arrives with advice on what needs to be done in order to secure victory over their enemies. Jesus arrives with news of what has already been done!  The victory has already been won.

The only enemy left to be defeated is death (1 Cor 15:26), and paradoxically, it is finally defeated when you die.  When you pass from this life into the next, death’s hold on you is finally lost.  That is what Paul is talking about in 2 Cor 15:55-57 when he says.

There is a lot more I would like to say about God and time travel but that is probably a blog entry for another day. 🙂