What does a Canadian white male do with what is happening in Ferguson, MO? The violence and the bitter distrust is heart breaking and I don’t know what I can do about it. I would like to think that I could hold this at arms length and shake my head condescendingly since this kind of thing is impossible in Canada. But it’s not that simple. 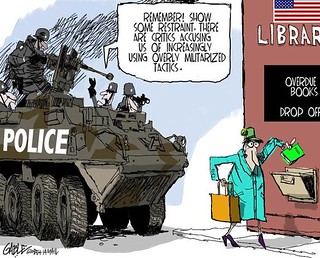 While we don’t arm the highway patrol in Canada like a SWAT team, racism is a complex thing and it exists here in Canada like it does everywhere else. Racism is more pervasive than it initially appears and it is more than unfairness, or injustice toward one particular racial group. For example, the Urban Alliance on Race Relations, a social advocacy group in Toronto, developed the Police Literacy Initiative. They produced a thirty minute documentary about racial profiling, that is eye-opening in this regard. I highly recommend you watch it. The documentary helps illustrate that it’s not just people that are racist, sometimes systems are racist too. Things in Canada might be different than in the United States, but it is a “same kind of different.”

I will beg forgiveness for the weakness of this over-simplification, but I believe there are two kinds of racism and both of them need to be addressed for there to be any justice and healing. First, there still exists a straight up, prejudicial, dehumanizing, all-I-see-is-your-skin-colour racism at work in our world. Call this “the objective pole” of racism. This was the first shoe to fall fifty years ago when schools were desegregated and racist laws and policies were challenged and overturned. North American Western culture finally decided fifty years ago that drinking fountains for whites only was morally wrong. This is the objective kind of racism that I can’t believe still exists in some parts today. Objective racism exists in people and in systems. You might have a neighbour who talks about other races in a dehumanizing way, by using ethnic slurs or offensive words. That’s racist. But you might also have a police force in your community filled with good, upstanding men and women who wouldn’t tolerate racial slurs or racist behaviour that never-the-less use a network of operating procedures that, when used together, are unfair and unjust.

There is something systemically wrong when, black males aged 15-24 are stopped by police and documented 2.5 times more often than white males the same age – and that’s not a statistic from Ferguson MO, USA, that’s in Toronto Ontario, Canada.   In Toronto, blacks make up 8.4 per cent of the population, but in 2010 they were involved in more than 25% of the documented interactions with the Toronto Police Force. Whether it is racist people or racist policies, this has got to stop.

Pastor Matt Chandler at the Village Church in Dallas TX  touched a raw nerve on Monday when he tweeted, 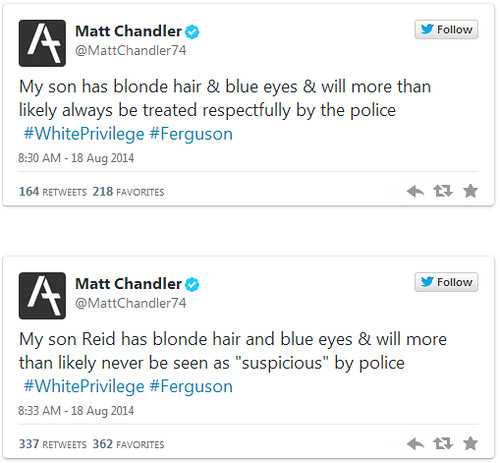 The responses were mixed. Later, he told an online news service that “it has been my experience that there are few things that enrage a large portion of white people like addressing racism and privilege.”  “We want to move past it, but we are not past it. Clearly, we are not past it. So, let’s press into it.” This is “the subjective pole” of racism: the lack of awareness of, or the unwillingness to address, the inequity of power in our society. Chandler writes,

What is so deceptive about white privilege is that it is different from blatant racism or bias. A privileged person’s heart may be free from racist thoughts or biased attitudes, but may still fail to see how the very privilege afforded to him or her shapes how he or she interprets and understands the situations and circumstances of people without privilege.

I may not have a racist bone in my body. I’m not the guy that crosses the street to avoid a person of colour. I’ve never told anybody to “get to the back of the bus.” But if I am unaware, or unwilling to consider how my race and gender have unfairly benefited me, I might not be a direct part of the problem, but I will never be part of the solution. 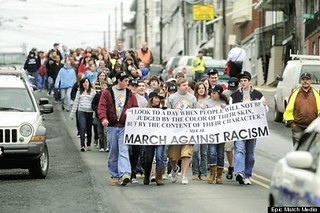 If all that we are addressing is the objective pole of racism, the outward, obvious, visible wickedness in our society, while we ignore the unfair privilege that some people have at the expense of others, is it any wonder there is a boiling rage just beneath the surface of western culture? What could be more insulting than a group of white teens marching in opposition to racism if they and their parents have refused to explore how their race has unfairly benefited them.

In the 8th century BC, God spoke through an unlikely prophet named Amos. God rebuked Israel not just for what they did – idol worship, and various forms of immorality – but also for what they failed to do. They failed to pay fair wages. They failed to provide for the widow, the orphan and the foreigner. While it’s true that these sins aren’t all racially motivated, some are, and the point still stands: if you are going to address a systemic sin like racism, you need to look at both sides: the objective pole and the subjective pole – what I do and what I allow to happen.

So how can you and I address unfair privilege? First, it takes humility to accept that there might be inequity that you benefit from and this humility doesn’t come easily for most of us.  You need to prayerfully tend your heart and ask God to reveal to ways you unfairly benefit at another’s expense.

If you want to explore inequity in your context look at the margins. We live in a fallen world so you likely won’t have to look far to find it. Where are people being excluded in your own context?

Are there refugee claimants in your neighbourhood that are unable to get access to health care ? Maybe you can support Doctors for Refugee Care or ask your doctor if he or she can help?

Are there kids in your neighbourhood with ESL needs who need help being successful in school? Ask your local principal if you can help kids who struggle.

You may very well have nothing to do with race relations in Ferguson Missouri, but if you prayerfully look to the margins in the community where you live, you will likely find opportunities to address those who are marginalized. Until there is an acknowledgement of privilege and repentance for discrimination, the gospel is not going to be displayed and lives are going to continue to be destroyed.

One thought on “Two Kinds of Racism”