In chapter fifteen, the Apostle Paul is wrapping up his first letter to the Corinthian church by answering a few practical questions. The Corinthian church had been confused about many things, not the least of which is Jesus and the resurrection of the dead. For starters, there were some in the church there who didn’t believe there would be a resurrection at all. If you asked them, they would say that the Christian life is a better life than you would live otherwise, but once it was done, so were you. “One and done, that’s it, you’re good, you’re gone.” Others still believed in an afterlife, but you had to stay alive until Jesus’ return. Jesus was coming back to take you to a place where you would live forever but you had to hang in there until he returned. It was a limited time offer. If you didn’t live long enough to see Jesus you wouldn’t see mansions of glory. Maybe Jesus’ heavenly home was just not big enough for all of us.

Paul kindly, diplomatically, pulls back the curtain in chapter fifteen and expands our understanding of what is to come, and like C.S. Lewis was fond of saying, “it’s a lot bigger on the inside.” Paul says that resurrection isn’t just an important part of the gospel, it’s the whole point. With a memorable phrase he writes,

“If there is no resurrection of the dead, then not even Christ has been raised … our preaching is useless and so is your faith … If Christ only provides hope for this world then we are of all people most to be pitied.” (1 Cor 15:14, 19)

Now wait a minute Paul. “Where is your sting?” “Where is your victory?” How can you say that? Has Paul never been to a funeral? Where is the sting? It’s right here! Tears from loved ones, the sorrow of saying good bye. We’re all feeling the sting aren’t we?

I was standing next to the casket at the visiting yesterday and I found it interesting how people would say goodbye. There are some who come right up to the casket (most of them were about 4 years old). But most keep an awkward distance. Some quickly moved to the other room. There are, of course, many who won’t come to a visiting at all. The sight of a loved one in a casket is too frightening. I suppose that a minister probably shouldn’t even speak of such things.

If we’re not careful, the victory of death can seem absolute, permanent, and final. Even to us who know better, the loss is profound, the sting is everywhere. Is Paul a fool? Why would he say such a thing?

In 2001 we invited Grandma to join us on a trip to Prince Edward Island for the first week in September. I was on a break from teaching at Great Lakes Christian High School and I needed to be somewhere other than home for the first week of school. Grandma paid her own way, but that holiday was the best money I ever spent. We had such a great time, we drove the country rounds across the island, we did a tour of Confederation Hall, saw the beach (though it’s not exactly beach weather in PEI in September.) 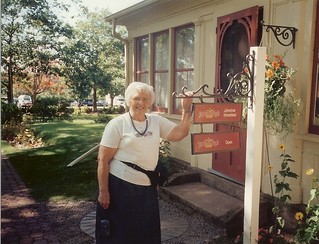 One of my favourite memories was visiting Green Gables. It’s a property that was once visited by L.M. Montgomery. She based her “Anne of Green Gables” stories on her experiences there. The property is nearly considered sacred ground for anyone from PEI, and people from all over the world come to tour the farm. Now I’m sure all of you know that Anne is not real right? The farm is just a place where Lucy Maud Montgomery based the books. She actually lived in Ontario when she wrote the most of the books. I imagine that the farm is full of Canadians during the summer, but in September the tours are full of Japanese tourists and old people (Grandma’s words, not mine.) 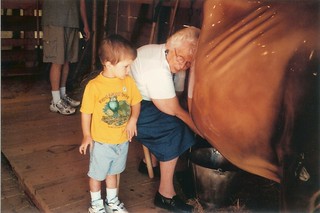 We got so many good stories that day. Grandma showed Devin how to milk a cow, we walked the property, toured the house, and in the lawn outside the house there were beautiful gardens full of cosmos, gladiolas, sunflowers and zinnias – all past their prime and heading into fall. Now Grandma is a practical woman, and we were all looking for souvenirs for our visit. What would be cooler than seeds from the garden that good old Anne might have planted her very self, right? And they’re free! Unlike the $15 letter opener and $12 tea cosy for sale in the gift shop. I gave her the nod and Grandma casually reached out to dead head one of the zinnias growing along the fence while we waited in line. A zinnia head, that’s dried up, is full of seeds and looks like you could easily break it off, but the stem is a fibrous thing. Those zinnias are a sturdy lot. But Grandma was fully committed now. She had reached out to get this head and it wouldn’t quite break off. She kept turning and turning it – the line had moved up now – and it wouldn’t break. The sight of Grandma, on the sly, trying to break this head off was funny, but the look of abject horror on the faces of the tourists behind her was priceless. The stories these Japanese seniors must have told back in Tokyo of the white haired Canadian infidel that desecrated the sacred gardens of Anne…

It’s a good thing they weren’t checking purses on the way out. When we got back to the cottage that night, Grandma dumped her purse on the table, full of seeds. 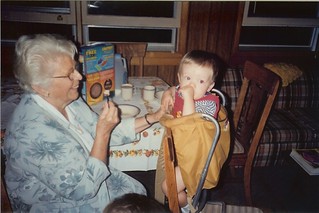 Every night after Devin and Jacob were in bed, we would watch the sunset over Northumberland Strait and talk about our day and hear some great stories. Grandma said she missed Grandpa, but these past eight years had been great and if she had to die tomorrow, that would be OK too. “It’s been a heck of a ride!”

That was September 10th, 2001, which I have heard some anthropologists call, despite what a calendar might say, the last day of the 20th Century. The next day everything changed.

“The sting of death is sin.”

The next day everything changed, didn’t it. Our flight back home was steered out of American airspace, and nearly diverted to Pearson airport, before we were sent back across Lake Ontario to Mount Hope Airport in Hamilton. We climbed down a set of stairs that were wheeled up to the exit door and left our plane right on the tarmac, next to a gigantic Air France wide-body 747. (I didn’t know Air France flew out of Mount Hope?) We had no idea what was happening until we got back to the car and listened to the radio on the way home. Grandma’s first thoughts were about Mike and Roger, two grandsons who were connected with the American military. She was worried about them. Who knows, with the stress of that day, or maybe it was going to happen anyway, she had her first heart attack the next day.

Grandma has struggled in these last few years. The burden of blindness has rested heavily on her and she has compared her oxygen hose to a leash more than once, at least to me. It is said that youth is wasted on the young, but I don’t think the young could handle being old. She handled the struggle of growing old with dignity and grace, but those of you that have known her these last few years have seen it – she has been restless, unable to settle.

She has struggled to find a place to settle. Five different homes over these last few years. It’s as if she remembers, unconsciously, deep in her bones, that she wasn’t made for this. In the days after September 11th people called this “the new normal,” and for Grandma, at least these last couple of years, it didn’t fit. These feet were made for walkin’ and these eye’s for reading, and she just didn’t feel right. If death could finally take these things from us forever, then maybe resurrection was important after all.

So where were we Paul? You were saying that death has lost? The fallacy of death’s victory is finally exposed in the cross. Those who live without a hope of resurrection live in fear, and those who live without faith in Christ’s return are overcome with despair. But Paul says the perishable are clothed imperishable. The mortal have cast off corruption and put on immortality. Death is undone by the cross.

Paul says that at a funeral, what we are observing here is not just something tragic that has ended but something beautiful that is just about to begin!

When the perishable has been clothed with the imperishable, and the mortal with immortality, then the saying that is written will come true: “Death has been swallowed up in victory.”
“Where, O death, is your victory? Where, O death, is your sting?”
The sting of death is sin, and the power of sin is the law. But thanks be to God! He gives us the victory through our Lord Jesus Christ.
Therefore, my dear brothers and sisters, stand firm. Let nothing move you. Always give yourselves fully to the work of the Lord, because you know that your labor in the Lord is not in vain. (1 Cor 15: 55-58)

2 thoughts on “A Funeral Sermon”