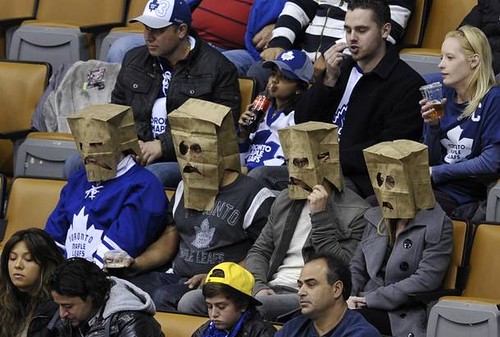 Seems like everyone’s a Leaf hater these days, and I mean HATE. It’s like everybody’s gotta tell me that the Leafs haven’t won the Stanley Cup since 1967. (Thanks, I’ll write that down somewhere) or tell me that the Leafs suck (no kidding). I know you’re all having some fun, but some folks need to check themselves here. If you get so jacked up telling me how much the Leafs suck that you’ve got spittle in your beard – listen, wipe up and have a tick tack would ya!

Being a Leaf fan is not a very rewarding vocation right now but whatever team you cheer for, you can tell a lot about a person by how they respond to their team’s success or failure.

For starters, sports fans, can we all agree that you had nothing to do with when your team last won a title. All you Patriot fans out there struttin’ around this week, ya you! – just pump the brakes for a second. You had less than nothing to do with winning last Sunday, you know that right? Your team was one yard from losing this thing and the only thing you did was see it happen. 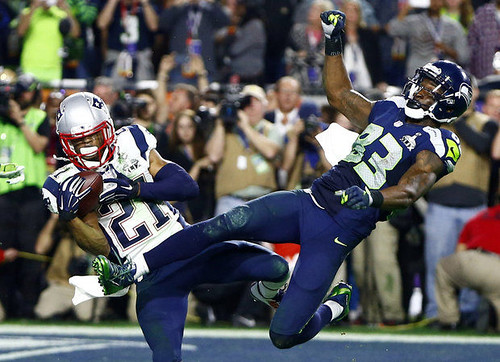 Watching the Superbowl last weekend and not giving two hoots about who won the game was quite an eye opener. It was an exciting game, unlike many Superbowls, and it wasn’t decided until the last minute. Lots of high intensity, it was a very entertaining football game, and that’s the purpose of watching right? It’s for fun isn’t it?

In case you were under a rock last Sunday, (SPOILERS) Seattle lost the game on an interception at the one yard line with less than a minute left in the game and the Seattle fans took it hard. I know. It happens. But if you throw yourself at a TV maybe you need a little perspective. It could be that this game, this sport, or maybe your team might have a place in your heart and in your universe that it can’t ultimately hold down.

Ken Sande, author of Peacemaker and Resolving Everyday Conflict wrote an article on his blog that is quite insightful. In it he talks about the progression of idol worship in our life. I know it might sound like a bit of a stretch to suggest that being a rabid sports fan is idol worship but if you can’t see this connection then watch this. When anything or anyone becomes ultimate to you, then it can become an idol.  Idol worship can grow to huge proportions in our lives unless it is recongnized. When idol worship is present, it develops through stages:

There is ultimately only one way out of this bondage: God says, “ I am the LORD your God, who brought you out of Egypt, out of the land of slavery. You shall have no other gods before me” (Ex 20:2-3).  Being a sports fan and enjoying watching sports is a pastime and it should be something that you enjoy but if it ruining your family life, it’s time to put it down.  The slide from pastime to idol is so sublte you sometimes need someone else to point it out.  I have had a couple of people tell me lately “you need to break up with the Leafs.” (Yes I have seen the video) But here’s the point, maybe we both need to quit talking about a sports team like its a long-term relationship. If you are describing being a sports fan in relational terms, don’t you think it’s gotten a bit too personal?  Maybe we both need to take a break from sports.

Jesus forgives us of sin and he makes eternal fellowship possible with him through his death, burial and resurrection, but Jesus also grants us freedom from daily bondages and daily dependencies, big and small in this world, right now. Jesus delivers us from the domination of our idols whether they be chemical, personal or sport related, but he brings that freedom one idol at a time. God calls us to identify and confess our idols one by one, and then cooperate with him while he steadily removes them from our heart.

If you don’t think this is a serious problem for you that’s great, but I invite you to pray that God would reveal to you where your true idols really are. I can honestly say I’ve never met someone who does not have some area of selfishiness in their life that God could help them root out. Idol worship is ultimately removed by replacing it with the worship of the creator, who is worthy of worship. The apostle Paul wrote,

When the set time had fully come, God sent his Son, born of a woman, born under the law, to redeem those under the law, that we might receive adoption to sonship. Because you are his sons, God sent the Spirit of his Son into our hearts, the Spirit who calls out, “Abba, Father.”  So you are no longer a slave, but God’s child; and since you are his child, God has made you also an heir. (Gal 4:4-7)

What Paul is saying is that Jesus desires relationship that is like family.  God is meant to be close enough to you that you talk to him like a parent.  Paul says that if you don’t speak to God like that, your living like a slave in your Master’s house when you should be living like a son or daughter.  Your sports team is not built to have a relationship with you, but God is.  God desires to embrace you and have you grow into a relationship with him. Don’t worship anything that is not worthy of it.