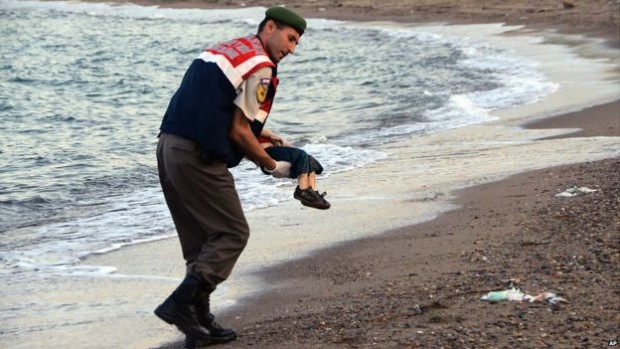 Pictures are said to be worth thousands of words but Nilüfer Demir’s picture of 3-year-old Alan Kurdi, found dead on the coast of Turkey could be worth millions of words.  On Wednesday this week Alan, his brother and mother all drowned trying to cross the Mediterranean from Syria to Turkey.  Only his father survived. It is a heartbreaking tragedy.

Already, in less than 24 hours, a billion people have seen this image and it is having a seismic impact on at least two election campaigns (Canada and the US) and is changing millions of people’s understanding of the migrant crisis in Europe. Social media is a double edged sword and it’s potential (both positive and negative) can be seen in an issue like this:

On the positive side, we can already see how the public can be moved to act by a powerful image in a way that rhetoric and logical reasoning cannot motivate. UK Prime minister David Cameron has promised to take thousands more refugees and Canadian PM Stephen Harper has also promised more international aid. But how much are these promises worth? Canada promised earlier this year to take in 10 000 Syrian refugees, but only a fraction of that number have successfully navigated the bureaucratic red tape. Promises are one thing, but action is another.

On the negative side, nobody wants to see this family’s tragic loss get hijacked and used for political purposes. A human life, even a short one, deserves respect and dignity and family members have the right to choose how their picture is being used – but unfortunately in this case they certainly don’t. Shocking images and click-bait blog entries (not unlike this one) have a tendency to make us more aware tragedy, and yet at the same time less responsive.  When we see a picture as horrible as this one we are emotionally upset, we are outraged, but then a couple days later we have moved on to the next outrageous thing.  If we’re not careful, social media can train its users to be  less and less responsive to what they see and hear.

Social media can be used to create a lot of increased awareness, but does it really do anything else?  Brian Dunning, in a blog post, points to the example of the Kony 2012 campaign which raised $31 million dollars for a charity called Invisible Children.  The money donated after the first film’s release was used to create (wait for it…) another movie, aimed at creating even more awareness.  It’s now three years later and no one can point to conclusive evidence that making Joseph Kony ‘famous’ has made things any better for Uganda’s child soldiers. 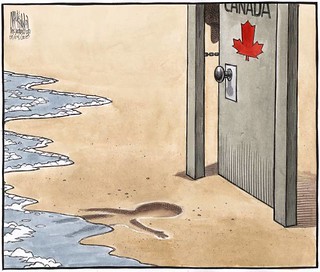 The world doesn’t need any more on-line outrage, what the world needs is more hospitality. The world also doesn’t need more money being donated, at least not just money.  Click here to see a list of  charitable organizations who are helping with settling refugees.  I won’t say that donating money is not helpful (it sure beats scrolling onto the next outrageous thing in your news feed) but we need to do more.  Canada has already made a promise to help Syrian refugees, and so far it  hasn’t happened.  If there was ever a time when we could make it happen it’s now – during an election campaign.  Contact your local MP and ask them why Canada has not assisted more Syrian refugees?

But there is more you can do.  Click here and learn how you or your church community can sponsor a refugee family and provide them with a place to land.